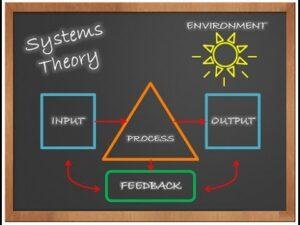 “Systems theory is the interdisciplinary study of systems, i.e. cohesive groups of interrelated, interdependent components that can be natural or human-made. Every system has causal boundaries, is influenced by its context, defined by its structure, function and role, and expressed through its relations with other systems. A system is “more than the sum of its parts” by expressing synergy or emergent behavior.

Changing one component of a system may affect other components or the whole system. It may be possible to predict these changes in patterns of behavior. For systems that learn and adapt, the growth and the degree of adaptation depend upon how well the system is engaged with its environment and other contexts influencing its organization. Some systems support other systems, maintaining the other system to prevent failure. The goals of systems theory are to model a system’s dynamics, constraints, conditions, and relations; and to elucidate principles (such as purpose, measure, methods, tools) that can be discerned and applied to other systems at every level of nesting, and in a wide range of fields for achieving optimized equifinality.

General systems theory is about developing broadly applicable concepts and principles, as opposed to concepts and principles specific to one domain of knowledge. It distinguishes dynamic or active systems from static or passive systems. Active systems are activity structures or components that interact in behaviors and processes or interrelate through formal contextual boundary conditions (attractors). Passive systems are structures and components that are being processed. For example, a program is passive when it is a disc file and active when it runs in memory. The field is related to systems thinking, machine logic, and systems engineering.” (Wiki)