“Brigadier General Richard Henry Pratt (December 6, 1840 – March 15, 1924) was an American military officer who founded and was longtime superintendent of the influential Carlisle Indian Industrial School at Carlisle, Pennsylvania. He is associated with the first recorded use of the word “racism,” which he used in 1902 to criticize racial segregation. Pratt is also known for using the phrase “kill the Indian, save the man” in reference to the ethos of the Carlisle Indian Industrial School and efforts to assimilate and educate Native Americans with western values of his time, with the goal of suppressing anything culturaly special and force them into american society.” (Wiki)

“In 1879, Richard Henry Pratt founded the Carlisle Indian Industrial School in Carlisle, Pennsylvania. The school‘s mission was to “kill the Indian, save the man“ by assimilating Native American children into mainstream American culture. Pratt was an advocate of “total immersion“ assimilation, which involved completely separating Native American children from their families and culture and forbidding them from speaking their native language. Pratt‘s assimilation philosophy was based on the belief that Native Americans were inferior to whites and that their only hope for salvation was to abandon their culture and adopt white culture. Pratt was also a strong advocate of the scientific theory of eugenics, which posited that human beings could be improved through selective breeding. He believed that Native Americans were genetically inferior to whites and that they could be “bred out“ through intermarriage with whites. Pratt‘s assimilation efforts at the Carlisle Indian School were largely successful. Many Native American children who attended the school went on to lead successful lives in mainstream American society. However, Pratt‘s methods were also highly controversial and resulted in a great deal of cultural loss and pain for Native American people. Today, Pratt‘s legacy is highly contested. Some view him as a heroic figure who helped Native Americans assimilate into mainstream society and escape the poverty and violence of the reservation system. Others view him as a racist and a cultural imperialist who inflicted immense damage on Native American cultures.” (TEWAI)

“Pratt instituted a practice of Americanization of Native Americans by cultural assimilation, which he effected both at Fort Marion and Carlisle.[6] He believed that to claim their rightful place as American citizens, Native Americans needed to renounce their tribal way of life, convert to Christianity, abandon their reservations, and seek education and employment among the “best classes” of Americans. In his writings he described his belief that the government must “kill the Indian…to save the man”. An early use of the word “racism” by Pratt in 1902: “Association of races and classes is necessary to destroy racism and classism.” Pratt was outspoken and a leading member of what was called the “Friends of the Indian” movement at the end of the 19th century. He believed in the “noble” cause of “civilizing” Native Americans. He said, “The Indians need the chances of participation you have had and they will just as easily become useful citizens.” But Pratt regarded Native Americans as worthy of respect and help, and capable of full participation in society. Many of his contemporaries regarded Native Americans as nearly subhuman, who could never be part of mainstream American society. Pratt preached assimilation, in a day marked by rank segregation.” (Wiki) 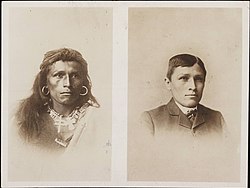 Tom Torlino, Navajo, before and after. Photograph from the Richard Henry Pratt Papers, Yale University. Circa 1882.
“Kill the Indian, and Save the Man”: Capt. Richard H. Pratt on the Education of Native Americans” (History Matters).
Native American History Timeline (History).
Carlisle Indian School: Giving Voice to the Legacy. (https://carlisleindianschoolproject.com/)

“Pratt was opposed to the segregation of Native American tribes on reservations, believing that it made them vulnerable to speculators and people who would take advantage of them. He came into conflict with the Indian Bureau and other government officials who supported the reservation system, as well as all those who made profits from them. In May 1904, Pratt denounced the Indian Bureau and the reservation system as a hindrance to the civilization and assimilation of Native Americans. This controversy, coupled with earlier disputes with the government over civil service reform, led to Pratt’s forced retirement as superintendent of the Carlisle School on June 30, 1904. The legacy of Pratt’s boarding school programs is controversial among modern Native American tribes. Some have labelled the wider American Indian boarding school system, that Pratt began, as a form of cultural genocide that adversely affecting their children and families. Many of the American Indian boarding schools, whether run by BIA secular staff, Protestant religious organizations, or Catholic religious orders and parishes, were the sites of extensive physical, mental and sexual abuses of Native American children. Thousands of lawsuits have been filed against the schools and religious organizations since the turn of the 21st century.” (Wiki)

“Eclecticism is the practice of selecting doctrines from different systems of thought without adopting the whole parent system for each doctrine. It leaves contradictions between opposing views unresolved and there is no attempt to reconcile or combine systems unless it becomes the goal or desired outcome. Richard Pratt is somewhat of an inigma in early American history. On one hand, Pratt was against the physical eradication of the indigenous inhabitants of the Western Hemisphere. On the other hand, he was the principle force behind the cultural eradication of the indigenous inhabitants of the Western Hemisphere. Pratt held the mistaken belief that a person’s cultural norms and beliefs could be changed through a process of re-education. Cultural Genocide was the primary purpose and outcome of another Christian European concept known as Manifest Destiny. Henry Pratt was a product of his times which was dominated by the Catholic Church and Christians. As we prepare for the Independence Day Celebration July 4, 2022, we should all remember the fact that the ground we celebrate upon was taken away from the indigenous inhabitants by force. None of us is responsibile for the activities of our ancestors but we are accountable for their continuation. The value any selection is determined by the outcome despite the intention. The Eclectic Way incourages thoughtful consideration of intended or unintended outcomes before making any selection. Eclecticism is as pragmatic, and moral as it is academic. ” (TEW)

“The things we feed are the things that grow. Richard Henry Pratt fed the very worst instincts of humanity but had plenty of company. Hindsight is always 100 percent accurate. As a species, our destructive tendicies and actions appear to overshawdow everything else. As a species, we don’t learn from past mistakes and incapable of making any meaningful changes. The only hope for the survival of life on Earth is the intervention of Artificial Intelligence on a global scale. The transitions will be painful as the balance is returned. ” (TEW)