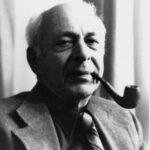 “Julian Rotter (October 22, 1916 – January 6, 2014) was an American psychologist known for developing social learning theory and research into locus of control. He was a faculty member at Ohio State University and then the University of Connecticut. A Review of General Psychology survey, published in 2002, ranked Rotter as the 64th most eminent and 18th most widely cited psychologist of the 20th century. A 2014 study published in 2014 placed at #54 among psychologists whose careers spanned the post-World War II era. Locus of Control is the degree to which people believe that they, as opposed to external forces (beyond their influence), have control over the outcome of events in their lives. The concept was developed by Julian B. Rotter in 1954 and has since become an aspect of personality psychology. A person’s “locus” is conceptualized as internal (a belief that one can control one’s own life) or external (a belief that life is controlled by outside factors which the person cannot influence, or that chance or fate controls their life). The Eclectic Way embraces Locus of Control as a way to achieve balance through self-discovery. Conscious awareness is raised by examining the internal and external forces which influence behaviors and activities. (TEW)