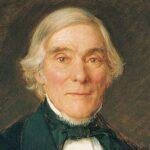 “Elias Lönnrot (9 April 1802 – 19 March 1884) was a Finnish physician, philologist and collector of traditional Finnish oral poetry. He is best known for creating the Finnish national epic, Kalevala, (1835, enlarged 1849), from short ballads and lyric poems gathered from the Finnish oral tradition during several expeditions in Finland, Russian Karelia, the Kola Peninsula and Baltic countries. Lönnrot was born in Sammatti, in the province of Uusimaa, Finland, which was then part of Sweden. He studied medicine at the Academy of Turku. The Great Fire of Turku coincided with his first academic year. As the university was destroyed in the fire, it was moved to Helsinki, the newly established administrative center of the Grand Duchy and the present capital city of Finland. Lönnrot followed and graduated in 1832.” (Wiki)

“Kalevala is an epic poem that was compiled by Elias Lönnrot from various oral sources. It is considered to be one of the most important works of Finnish literature, and it has had a significant influence on the development of the Finnish national identity. The poem includes a number of elements from different mythologies and folklore traditions, and it has been described as an “eclectic” work. The poem’s eclecticism has been seen as a strength, as it allows readers to find their own meaning in the work. However, some critics have argued that the poem’s lack of a cohesive narrative makes it difficult to follow. Nonetheless, the poem’s influence on Finnish culture is undeniable, and it remains an important work of Finnish literature. ” (TEWAI)

“Kalevala, Finnish national epic compiled from old Finnish ballads, lyrical songs, and incantations that were a part of Finnish oral tradition. The Kalevala was compiled by Elias Lönnrot, who published the folk material in two editions (32 cantos, 1835; enlarged into 50 cantos, 1849). Kalevala, the dwelling place of the poem’s chief characters, is a poetic name for Finland, meaning “land of heroes.” The leader of the “sons of Kaleva” is the old and wise Väinämöinen, a powerful seer with supernatural origins, who is a master of the kantele, the Finnish harplike stringed instrument. Other characters include the skilled smith Ilmarinen, one of those who forged the “lids of heaven” when the world was created; Lemminkäinen, the carefree adventurer-warrior and charmer of women; Louhi, the female ruler of Pohjola, a powerful land in the north; and the tragic hero Kullervo, who is forced by fate to be a slave from childhood.” (Britannica, Wiki)

This eBook is for the use of anyone anywhere in the United States and most other parts of the world at no cost and with almost no restrictions whatsoever. You may copy it, give it away or re-use it under the terms of the Project Gutenberg License included with this eBook or online at www.gutenberg.org. If you are not located in the United States, you will have to check the laws of the country where you are located before using this eBook.

The Project Gutenberg eBook of Kalevala: the Epic Poem of Finland, by Elias Lönnrot – Read online in HTML

Kalevala : the Epic Poem of Finland — Complete by Lönnrot and Crawford