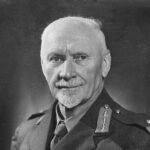 “Field Marshal Jan Smuts,  (24 May 1870 – 11 September 1950) was a South African statesman, military leader and philosopher. In addition to holding various military and cabinet posts, he served as prime minister of the Union of South Africa from 1919 to 1924 and 1939 to 1948. In 1919, Smuts replaced Botha as prime minister, holding the office until the South African Party’s defeat at the 1924 general election. He spent several years in academia, during which he coined the term “holism“, before eventually re-entering politics as deputy prime minister in a coalition with Hertzog; in 1934 their parties subsequently merged to form the United Party. Smuts returned as prime minister in 1939, leading South Africa into World War II at the head of a pro-interventionist faction. He was appointed field marshal in 1941 and in 1945 signed the UN Charter, the only signer of the Treaty of Versailles to do so. His second term in office ended with the victory of the reconstituted National Party at the 1948 general election, with the new government beginning the implementation of apartheid.” (Wiki)