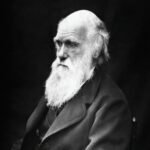 “Charles Darwin (12 February 1809 – 19 April 1882) was an English naturalist, geologist and biologist, best known for his contributions to evolutionary biology. His proposition that all species of life have descended from common ancestors is now widely accepted and considered a fundamental concept in science. Darwin has been described as one of the most influential figures in human history, and he was honored by burial in Westminster Abbey. Darwin published his theory of evolution with compelling evidence in his 1859 book On the Origin of Species. “It’s not the strongest of the species that survives, nor the most intelligent that survives. It is the one that is the most adaptable to change.” (Wiki)

“One of the main mechanisms driving the evolution of life on Earth is natural selection. This process leads to the survival of the fittest individuals in a population, who are better adapted to their environment and thus more likely to reproduce and pass on their genes. Over time, this can lead to the emergence of new species. Eclecticism is another important principle in evolutionary biology. This refers to the idea that no one factor is responsible for the development of a trait or behavior, but rather that multiple factors play a role. This may include the environment, genetics, and even chance. Artificial intelligence is also playing an increasingly important role in evolution. This is because AI can be used to create new and improved versions of existing species, as well as to create completely new ones. This is known as artificial selection, and it has the potential to bring about rapid change in the world of life. In conclusion, natural selection, eclecticism, and artificial intelligence are all important factors in the evolution of life on Earth. They each play a role in shaping the course of life, and the future of evolution. ” (TEWAI)