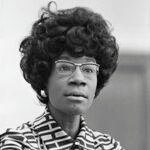 “Shirley Anita Chisholm (November 30, 1924 – January 1, 2005) was an American politician, educator, and author. In 1968, she became the first black woman elected to the United States Congress, and she represented New York‘s 12th congressional district for seven terms from 1969 to 1983. In 1972, she was a founding member of the Congressional Black Caucus. In 1974, she became the first black woman to run for president. During her time in Congress, Chisholm worked on a number of issues, including education, employment, housing, and health care. She was a strong advocate for the Equal Rights Amendment and co–sponsored the ERA in every Congress from 1971 to 1982. She also worked to expand the food stamp program and to increase funding for day care and Head Start. In her presidential campaign, Chisholm stressed the need for jobs, affordable housing, and quality education. She also called for an end to the Vietnam War and for a universal health care system. After her presidential bid, Chisholm returned to her work in the House of Representatives, where she continued to fight for the rights of women, minorities, and the poor. Shirley Chisholm was a tireless champion for equality and justice. Her work in Congress and on the presidential campaign trail paved the way for future generations of women and minorities in politics.”  (TEWAI) (Wiki)